Can science change the future?

The Science Dean’s Thank-You Reception was a celebration of the world-changing innovation that occurs when scientific and philanthropic visions collide.

Donors were given the opportunity to mingle with the scientists whose lives they have impacted with their generosity.

The event also launched the John McKenzie Fellowship Fund. Thanks to $2 million worth of philanthropic support, this fund is now able to support an early career researcher in science every year. 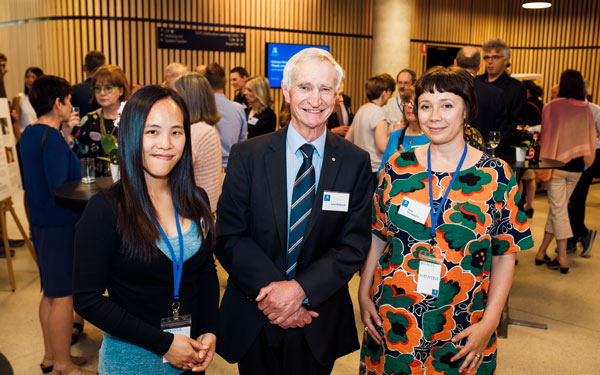 John McKenzie himself spoke passionately about the importance of science research for the University of Melbourne. He described research, education and engagement as key elements for generating innovation.

“Without your support, it simply wouldn’t happen,” he said in an address to our donors.

“It’s perhaps the wisest philanthropic contribution you’ve made, because you really are influencing young people who are going to have a significant impact on the future of the world.”

John highlighted the need for a teaching staff that is generating cutting-edge research on the international stage. To become the next generation of world leading scientists, students must have access to world-leading researchers.

This is true for early career researcher and passionate science communicator Dr Wing Chan. Wing's research asks the question: “Can we use science to change the future of our coral reefs?”

“It was always my dream to study the coral reef, and the dream came true when I got the scholarship here at the University of Melbourne.”

Philanthropic support has a huge impact in my career. It is not only about the money that I receive. It is somebody believing in me as a scientist and believing in my work. Dr Wing Chan

Thanks to a postdoctoral grant, Wing now leads a project as Principal Investigator. She is excited to provide the same opportunity that she had to her own student recruit. “It feels so incredible to be able to support the next generation of marine scientists to achieve their dreams. It would not have been possible without the support of people like you.”

What makes us human?

Palaeoclimatologist and McKenzie Fellow, Dr Amy Prendergast, also used the platform to “celebrate the donors that make much of our science possible”.

In the spirit of generating discussion in a room full of diverse donors and scientists, Amy posed the questions:

“What do you think are the most important, defining traits that make us human? And going forward, which of these traits will allow us to adapt and survive in the face of the current climate crisis?

Are you interested in supporting Science research? Find out how you can make a difference.