Food systems face increasing pressures due to the impacts of climate change, but cities have a role in creating climate resilient food systems.

Cities can contribute to sustainable and resilient food systems

The briefing paper draws together the ways in which cities present an opportunity for resilient and sustainable food production under increasingly challenging conditions.

International policy initiatives such as the 2014 Medellin Call for Action and the 2015 Milan Urban Food Policy Pact have recognised the role of cities in contributing to more resilient and sustainable food systems.

City food bowls can reduce the dependence of city populations on distant sources of food and maximise the use of the limited natural resources available for food production, particularly fertile soils and water.

The areas of food production close to Melbourne’s two main water treatment plants have access to recycled water for vegetable production, and have the potential to be developed as ‘drought proof foodbowls’.

The farmland on the edge of Melbourne is under threat from urban sprawl, but if the city is planned in a way that retains peri-urban farmland, this city region food system could contribute to a more resilient city food supply in the face of increasing climate pressures in Southern Australia.

Impacts of climate change on food production in southern Australia

Climate change is likely to affect agricultural production in Australia. Drying in the southern states will have a significant impact, particularly on irrigation in the Murray-Darling Basin. 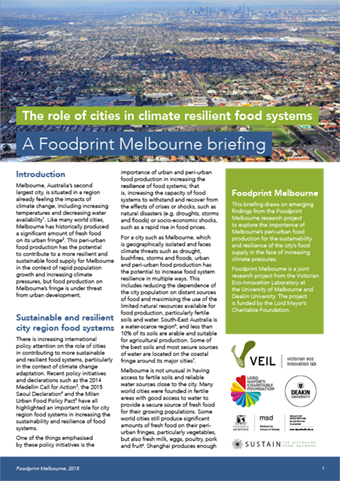 Sign up for the Foodprint Melbourne newsletter for project updates