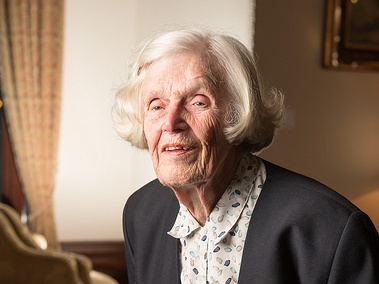 In 2018, in recognition of her significant achievements and contributions to society, the University of Melbourne awarded its highest honour, the degree of Doctor of Science(honoris causa) to Alison Harcourt. She was also named the 2019 Victorian Senior Australian of the Year. Here, we highlight some of her remarkable accomplishments.

Alison Harcourt (nee Doig) is an alumnus and past staff member of the University. She completed a BA(Hons)(1950), BSc(1952), and MA(1958) at the University of Melbourne, majoring in mathematics and statistics.

Alison is a pioneer in the field of optimisation, having co-authored the seminal paper: A. H. Land and A. G. Doig, An Automatic Method of Solving Discrete Programming Problems, Econometrica, vol. 28, no. 3, 1960.

This ground-breaking paper is well-known to researchers in optimisation since it proposed a method for solving integer programming problems which later became known as the "branch-and-bound" method. It underpins modern day optimisation software packages that provide efficient solutions to challenging combinatorial optimisation problems. Applications include logistics, transportation, scheduling, telecommunications, and radiotherapy treatment planning. This seminal paper has 3000 Google Scholar citations and has had enormous impact in the academic literature as well as for practical problem solving for economic and social benefits.

Alison co-authored the paper while working as a research assistant together with Ailsa Land at the London School of Economics. They published without identifying themselves as women due to the perceived stigma against female mathematicians at the time. By the mid-1960s, Alison returned to the University of Melbourne to take up a position as a Senior Lecturer in Statistics. Her talents were in high demand as a statistical collaborator, and she went on to have a strong career as a statistician.

Alison's statistical analyses have had profound impacts influencing government policy. Examples include the first attempts to estimate poverty in Australia (informing the 1972 Royal Commission of Inquiry into Poverty, work headed by Professor Ronald Henderson) and, in conjunction with Dr Malcolm Clark, a statistical analysis of bias that lead to an amendment of the Commonwealth Electoral Act in 1984. This amendment introduced a ‘double randomisation’ method for allocating positions of political parties on ballot papers, that is still used today.

Alison was also foundation secretary of the Victorian branch of the Statistical Society of Australia (1963-1967), and has co-authored two books and written numerous journal articles.

She formally retired in 1994 but continues to make a difference to the lives of our students, sharing her passion for teaching as a sessional tutor in undergraduate statistics subjects at the University.

On a more personal note. Alison loves the Australian bush (she was a very keen rogainer) and animals such as lyrebirds and echidnas, the music of Bach, Beethoven and Mozart, and firmly believes that St Kilda will win at least one more AFL premiership. To relax, she enjoys deep thinking (i.e. doing nothing), reading books and Scottish country dancing.